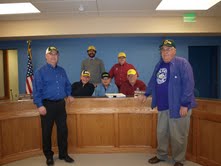 At Tuesday’s meeting, Nemaha County Coop General Manager Jay Ronnebaum approached the Commission with the plan to build a grain handling facility on the site of the recently demolished existing building, which borders the Railroad tracks on Highway 99.

Ronnebaum said the plans are still in their infancy, but wanted to allow the City to voice any concerns before spending the money to do all the necessary testing. He said they are looking at multiple options that would be more in line with today’s demands for grain storage.

Mayor Bill Ditto said they were in favor of supporting business and to keep in touch as plans develop.

In other business, the Commission approved the Ordinance for the Final Plat of the Schneider Subdivision after receiving the memo from the Planning Commission giving their unanimous approval of the plan.

The subdivision runs from 4th and Sycamore to the Riverview area.

Mayor Ditto said there was always the hope there would be a street thru the area, but it’s never happened.

According to the Developer Michael Schneider, a street through the area is not feasible because of the location of existing property, and the plan proposes a cul-da-sac.

The Commission approved with a 4 to 1 vote.