Dustin Monroe of Wamego was found guilty of two counts of aggravated assault on a law enforcement officer, and criminal discharge of a weapon at an occupied building early Thursday morning at Pottawatomie County District Court.

Monroe entered a no contest plea on all of the charges in agreement with a plea agreement that dropped several other charges related to the incident.

According to the prosecution on the 10th of December 2013 at approximately 06:00 am Monroe was outside of the Quality Inn on East Poyntz Avenue with a long rifle beside a white truck.  According to the prosecution several law enforcement officers were on the scene, and repeatedly identifying themselves and requesting Monroe drop his weapon.  Monroe responded by sporadically firing several shots from his weapon.

Several bullets struck the Quality Inn, and patrons inside the establishment took cover from the fire under furniture.   Prosecutors say Monroe at one point turned and fired shots at the Aldi grocery store located directly across from the Quality Inn.

Police finally resorted to shooting Monroe to bring the incident to a close, and then transported him to a nearby hospital for treatment of the gunshot wound. In the investigation conducted after the incident several bullet holes were found on the Quality Inn building.

A video by a nearby vendor was taken at the time of the incident which prosecutors say show the police officers identifying themselves, and ordering him to drop his weapon.

In accordance to the plea agreement two counts of aggravated assault on a law enforcement officer, and one count of criminal damage to property were dropped by the state.

Prosecutor Sherri Schuck says the agreement saves the state time and money.  Schuck says to have Monroe plead guilty to three felonies without the ability to appeal is very beneficial due to solid convictions, and nothing would be gained from a prolonged trial.

Sentencing was subsequently set for 14th August at 1:00 pm.  Monroe is currently out on bond awaiting sentencing. 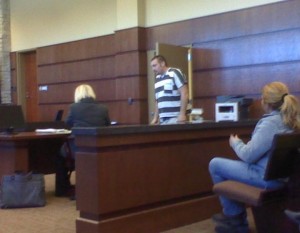