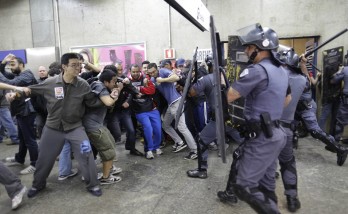 Subway train operators, along with some activists, clash with police at the Ana Rosa metro station on the second day of their metro strike in Sao Paulo, Brazil, Friday, June 6, 2014. The workers clashed with police as they tried to block other operators from breaking the strike. Overland commuter train operators went on strike Thursday, putting at risk the only means that most soccer fans will have to reach Itaquerao stadium ahead of next week’s World Cup.