Wamego officials visited with Pottawatomie County Commissioners in Westmoreland Monday, regarding plans for large type traffic thoroughfares, with work in the area of Balderson Boulevard and Valley Street–and Military Trail Road near the Industrial Park. Wamego City Manager Merl Page promised to bring additional information back to the commission in a couple of weeks. Page says plans are for a joint project.
County Commission Chair Stan Hartwich says estimated cost would be a little over two million apiece with a possible 50/50 split, but Pottawatomie County commissioners decided to start out with an estimate on the cost of the design first, while deciding how it would pay for it.
The first request for an increase in budget in a couple of years was made by Pottawatomie County Extension agent Austin Sexton, who made a presentation at Monday’s Pottawatomie County Commission meeting. Chair of the local extension group’s board Tom Nelson was also present for the meeting in Westmoreland. Nelson told commissioners how 4-h participants learn about public speaking and parliamentary procedure and make good citizens.
Sexton mentioned Pottawatomie County is one of the biggest 4-h counties in the state. But he also mentioned the variety of other programs offered by extension such as tractor safety sessions, school district programs, the KLA field day, farm transition planning, and a recent lease workshop. Sexton is requesting a 6.9 percent increase in budget from $185,841 to $197,162.
Commissioners Monday also approved an agreement with Country Stampede and a cereal malt beverage license for the event. They also approved wage adjustments for a jailer and two deputies, but stipulated the Sheriff would have to find the money in his current budget. Commissioner Pat Weixelman asked about a possible future resolution on wage policy, stressing proposals only once a year–rather than adjustments trickling in every other week.
And the group heard from Public Works Director Leu Lowery about dust control, which has been difficult with recent rain. County Sanitarian Scott Schwinn and Audrety Schremmer with Three Rivers also addressed the commission. She’s also requesting a slight increase in budget for next year. 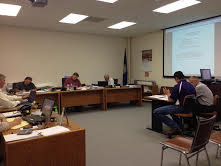