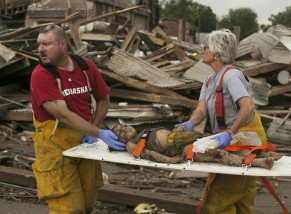 Rescue personnel tend to 5-year-old Calista Dixon in Pilger, Neb., after two giant tornadoes bore down on the small town on Monday, June 16, 2014. The girl later died, as did a motorist, David A. Herout, 74, of Clarkson, Neb. At least 19 people were taken to hospitals and most of the buildings in Pilger were heavily damaged or destroyed.