Should Riley County Police charge for working special events such as parades and races? That was the question considered by Riley County Law Board members Monday, with RCPD Assistant Director John Doehling telling the group that the 19 events this last year, amounting to 47 hours and 126 officers, added up to a lot of overtime, to the tune of $390,000.
Some of the event organizers spoke up, saying everything they raise goes to the community, and a 500 dollar bill or higher amount means a lot. In fact one person indicated he’d taken an event to Wamego where his group wasn’t charged a thing.
Pat Melgares serves as President of the Manhattan Cross Country Club, which he says is a non-profit, grass roots group. He told Riley County Law Board members Monday his group recently gave 36-thousand dollars to local schools. But he says there was a 500 dollar bill for the Poyntz Avenue mile, which suports Manhattan high school’s track teams. Melgares also predicts Riley County will eventually lose a lot of events with the new billing method.
In fact Doug Sellers with Body First moved one of its events, the recent Wicked Marathon, to Wamego for that very reason. Wamego Police told him that was part of their job and that is what they do. Sellers explained the dilemma. He says while he has a for profit business, this part of what they do is not–as proceeds go to the community.
Downtown Manhattan Executive Director Gina Scroggs told the group she not only is involved with downtown events, but is also a member of the RCPD Community Advisory Board–which gives her a different perspective. She says, “There’s got to be a balance. We need to find some way to maintain these community events, while not adding additional stress on the Riley County Police Department.”
Board member Wynn Butler admitted it won’t be an easy matter to decide, saying it will be tough to craft something that will cover everything, and board member Rich Jankovich agreed.
Plans are to get more information and discuss the matter more at the next meeting.
Law board members also heard from CAB Vice Chair Scott Emley about some complimentary correspondence the group received regarding RCPD. Emley reminded those attending the law board meeting that the community group mets at Bluestem Bistro on the first Tuesday of every month at 11:30.
And a special forum is planned July second for members of the public who want to talk about the Riley County Police Department. Riley County Law Board member and City Commissioner Rich Jankovich adds he and a couple of others are in charge of the meeting, which will be held at 6 p.m. at the Manhattan Public Library. He says  whatever comes from the meeting will be forwarded to the law board and RCPD.
Law board members also had an update Monday from Community Corrections Director Shelly Williams about what she calls a “great working relationship” with RCPD. 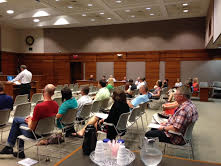