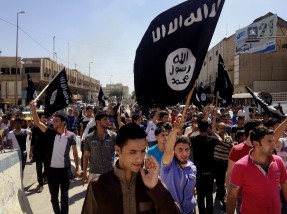 Demonstrators chant pro-al-Qaida-inspired Islamic State of Iraq and the Levant (ISIL) as they carry al-Qaida flags in front of the provincial government headquarters in Mosul, 225 miles (360 kilometers) northwest of Baghdad, Iraq, Monday, June 16, 2014. Sunni militants captured a key northern Iraqi town along the highway to Syria early on Monday, compounding the woes of Iraq’s Shiite-led government a week after it lost a vast swath of territory to the insurgents in the country’s north.