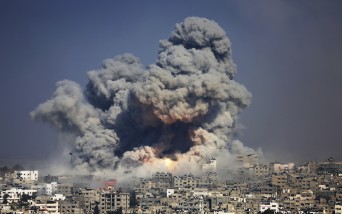 Smoke and fire from the explosion of an Israeli strike rise over Gaza City, Tuesday, July 29, 2014. Israel escalated its military campaign against Hamas on Tuesday, striking symbols of the group’s control in Gaza and firing tank shells that shut down the strip’s only power plant in the heaviest bombardment in the fighting so far. The plant’s shutdown was bound to lead to further serious disruptions of the flow of electricity and water to Gaza’s 1.7 million people.