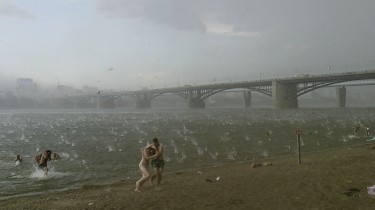 In this photo taken on a smartphone on Saturday, July 12, 2014, people run to shelter from hailstorm on the beach at Ob River, the major river in western Siberia in Novosibirsk, Russia. The Investigative Committee said in a statement published online Monday that two young girls aged three and four had died Saturday in the lakeside town of Bredsk, not far from the large Siberian city of Novosibirsk. The two girls died after sustaining traumatic brain injuries when a tree fell on their tent, where they were taking shelter from the storm along with their families.

Cats Can’t Catch A Break In Loss To Oklahoma