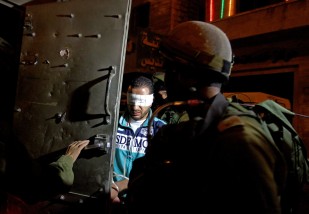 Israeli soldiers detain a blindfolded Palestinian man in the West Bank city of Hebron, early Wednesday, July 2, 2014. Tensions have mounted between Israel and the Palestinians after the bodies of three Israeli teens were found in the West Bank more than two weeks after they went missing. Later Wednesday the body of a Palestinian teenager was found west of Jersusalem hours after it was reported he was forced into a car. The killing could be retaliation for the murder of the Israeli teens.