Several court appearances are set in Geary County District Court on  a variety of cases varying from rape to murder. Jason Nazario, who faces rape and failing to register as a sex offender charges, is now set for August 28th. Nazario has had several continuances for a preliminary hearing. He was charged with the alleged rape of a 13-year-old last December. The failing to register as a sex offender is in a separate case.
Also set for August 28th is a status hearing for Fort Riley soldier Kevin Guiler, 27, who faces charges which include criminal threat and aggravated assault. Guiler was taken into custody a few months ago after a five and a half hour standoff involving negotiations with law enforcement authorities.
August 26th a status hearing is set for Devoris Newson, 27, of Junction City, on charges which include attempting to flee and elude, obstruction of the legal process, and driving while suspended.
A Manhattan man faces an August 29th arraignment in a case earlier this year allegedly involving a 12-year-old female and two counts of aggravated indecent liberties with a child. Trevor Triffet was arrested May 20th on the charges.
Michael Hall, 47, of Junction City is set to appear in court again September fifth. Hall entered a no contest plea last month in a felony animal cruelty case, which involved hanging a German Shepherd puppy until it died.
A September 26th date has been set for two men charged in connection with a shooting last month on West Sixth Street in Junction City. Robbie Fountain Jr., 21, was arrested on an attempted murder charge, with Jefferson James, 34,arrested on a charge of conspiracy in connection with the case. And preliminary hearings are set for three people charged in connection with a Junction City murder case.
October 10th preliminary hearings are set for Maryssa Middleton of Colorado, Larry Anderson of Manhattan, and Drexel Woody of Fort Riley. The three were arrested in February stemming from the murder of  Amanda Clemons, 24, of Junction City. Middleton and Anderson face first degree murder, aggravated kidnapping, and conspiracy charges. Woody s charges include aiding and abetting a first degree murder, aggravated kidnapping, and conspiracy. The arrests were made after Clemons body was found in a remote location in rural Riley County a couple of days after she was reported missing. 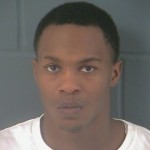