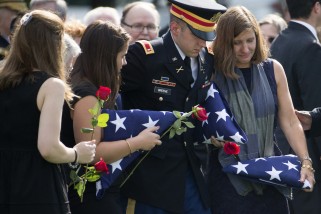 Retired Col. Susan Myers, right, is comforted by her children, 1st Lt. Matthew Greene, second from right, and Amelia Greene, during a burial service for her husband, Army Maj. Gen. Harold Greene, at Arlington National Cemetery, on Thursday, Aug. 14, 2014, in Arlington, Va. Greene was killed when a gunman dressed as an Afghan soldier turned on ISAF troops, wounding about 15 including a German general and two Afghan generals. He is the highest-ranking U.S. military officer to be killed in either of America’s post-9/11 wars.