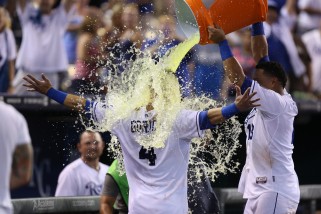 KANSAS CITY, Mo. — The Royals were trailing the Twins by a run in the ninth inning Tuesday night, and Kansas City manager Ned Yost was on the top step of the dugout, conferring with catching coach Pedro Grifol about the potential decisions he would have to make.

Alcides Escobar led off with a blooper to shallow right for a single, and Alex Gordon swatted the second pitch he saw over the right-field wall to give the AL Central-leading Royals a dramatic 2-1 victory over Minnesota — and help them avoid their first three-game skid since mid-July.

The Royals had been shut down all night by Ricky Nolasco, who scattered three hits over seven innings. But after going quietly in the eighth, they managed to break through against Perkins (3-1), who had converted 18 consecutive saves on the road.

Wade Davis (7-2) earned the win with a perfect ninth inning in relief.

Danny Duffy was nearly as sharp for the Royals as Nolasco was for Minnesota. The left-hander allowed four hits and a pair of walks over 6 2/3 innings, but was in line for the loss after giving up a double to Brian Dozier and a slicing single to Joe Mauer to start the seventh.

The Royals had several chances to push a run across much earlier — and with much less drama.