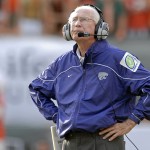 The Kansas State Wildcats are ranked #20 in the Associated Press Sportswriters Preseason Poll released Sunday afternoon. The Wildcats will open the season ranked in both major polls as they checked in at #21 in the Coaches Poll released earlier this month.

K-State is one of three Big 12 teams in the preseason poll with Oklahoma ranked #4 and defending Big 12 Champion Baylor ranked 10th. Texas, TCU, Texas Tech and Oklahoma State were not ranked in the Top 25 but were among the teams receiving votes.

Stay connected to all things KSU on the go just text EMAW to 88474
For full video wrap-ups, including analysis, highlights, coaches & player interviews of K-State Football & Basketball check out PowerCatGameday.com