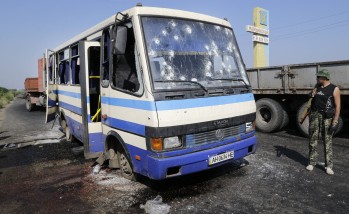 A pro-Russian rebel stands at a block-post on the outskirts of Donetsk near a bullet riddled bus, eastern Ukraine, Wednesday, Aug. 13, 2014, where at least 12 militiamen fighting alongside government troops against pro-Russian separatist rebels in eastern Ukraine have been killed in an ambush, a spokesman for their radical nationalist movement said Wednesday.