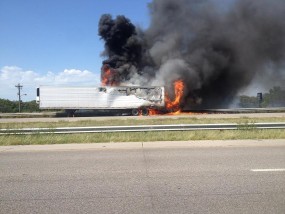 The Kansas Highway Patrol has provided more details regarding the semi trailer that caught fire on just west of Exit 301 to Fort Riley Sunday afternoon.
While there were no injuries, a spokesman with KHP indicates the 2014 Freightliner trailer was a complete loss. The semi was hauling icing for doughnuts to Denver, Colorado.
And another accident was reported in that same general location that did involve injuries–apparently caused by the back-up of traffic due to the semi fire. The Geary County Sheriff’s Department indicates deputies responded to the two vehicle injury accident at about 3:20 p.m. Sunday.
A 2000 Ford passenger car driven by Andrya Maertz of Junction City was traveling west when it struck a 2001 Audi passenger car driven by Cornelia Carageo of Denton,Texas in the rear.
###

Reports indicate traffic was at a standstill as of 3:00 p.m. Sunday afternoon.

KMAN will continue to bring you updates as they become available.

(Thanks to Dave Lewis and Mikayla Gentine for the pictures) 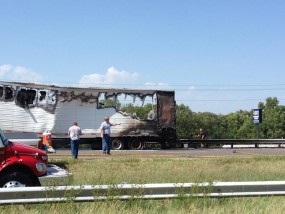