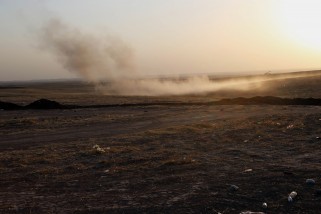 Smoke rises after airstrikes targeting Islamic State militants near the Khazer checkpoint outside of the city of Irbil in northern Iraq, Friday, Aug. 8, 2014. The Iraqi Air Force has been carrying out strikes against the militants, and for the first time on Friday, U.S. war planes also directly targeted the group, which controls large areas of Syria and Iraq.