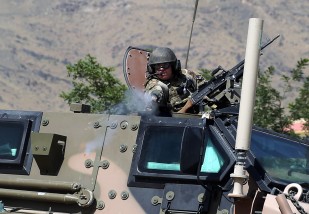 A NATO soldier opens fire in an apparent warning shot in the vicinity of journalists near the main gate of Camp Qargha, west of Kabul, Afghanistan, Tuesday, Aug. 5, 2014. Earlier in the day, a man dressed in an Afghan army uniform opened fire on foreign troops at the military base, killing a U.S. two-star general and wounding others, among them a German brigadier general and a number of Americans troops, authorities said.