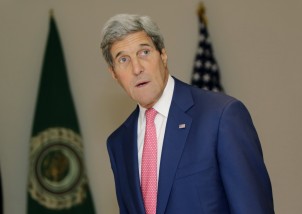 U.S. Secretary of State John Kerry prepares to meet with Secretary-General of the Arab League Nabil Elaraby in Cairo, Egypt, Saturday, Sept. 13, 2014. Kerry arrived in Cairo for a short visit of less than a day to discuss how Egypt can help in the fight against the Islamic State group. He has been on a regional trip to garner support for President Barack Obama’s initiative to go assemble a coalition of nations willing to go after the militant group. Kerry heads to Paris next for a meeting on how to support Iraq in its fight against the Islamic State group, which holds large parts of Iraq and Syria.