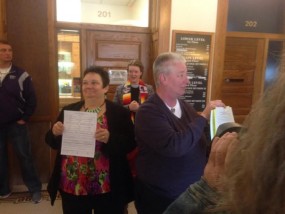 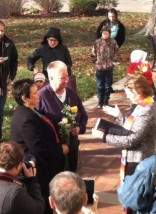 A Riley County same sex couple KMAN’s kept in touch with since last month were finally able to say “I do” during a Thursday ceremony outside the Riley County Courthouse, shortly after they received their marriage license at Riley County Court. KMAN spoke with Darci Bohnenblust last month after she and her current spouse Joleen Hickman were denied their application for marriage.
Bohnenblust, who is an employee at Kansas State University, told KMAN this past Wednesday that she and Joleen were waiting. But apparently that changed quickly, with the marriage license granted Thursday morning.
The U-S Supreme Court Wednesday said no to a request from Kansas to prevent gay and lesbian couples frommawrrying while the state continues to fight the issue in court. The American Civil Liberties union has sued on bhalf of two couples denied licenses in Sedgwick and Douglas Counties.
Interview with Darci Bohnenblust:
darcibforweb.mp3