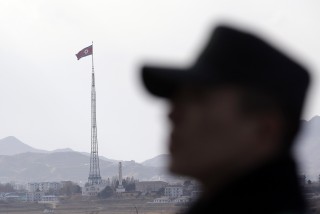 A South Korean soldier stands as a North Korean flag flutters in the wind atop a 160-meter (533-foot) tower in the village of Gijungdong near the north side of the border village of Panmunjom, which has separated the two Koreas since the Korean War, in Paju, north of Seoul, South Korea, Wednesday, Nov. 12, 2014. South Korean troops fired warning shots Monday after North Korean soldiers approached too close to the border separating the rival countries, Seoul defense officials said.