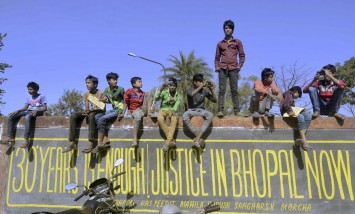 Children sit on the wall of the abundant Union Carbide factory as they watch a rally on the 30th anniversary of the Bhopal gas tragedy in Bhopal, India, Wednesday, Dec. 3, 2014. Hundreds of survivors of the Bhopal gas leak took to the streets Wednesday to mark the anniversary of the world’s worst industrial disaster, with protests demanding harsher punishments for those responsible and more compensation for the victims of the tragedy. On the morning of Dec. 3, 1984, a pesticide plant run by Union Carbide leaked about 40 tons of deadly methyl isocyanate gas into the air of the central Indian city, quickly killing about 4,000 people.