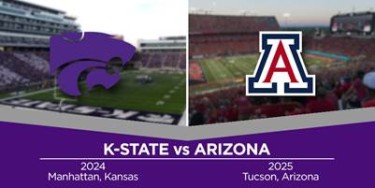 Following the recent addition of Stanford to K-State’s future football schedules, Athletics Director John Currie has announced that the Wildcats have reached an agreement to play a home-and-home series with Arizona of the Pac-12 Conference in 2024 and 2025.

The series with Arizona’s Wildcats begins with a game in Manhattan in 2024, while the series will shift to Tucson in 2025. The two teams have squared off a total of seven times with the last meeting being back in 1978, while Arizona holds a 5-1-1 edge in the series.

“We are excited to announce a home-and-home series with Arizona of the Pac-12 Conference,” Currie said. “It is important for us to continue to schedule non-conference games with opponents that make sense for K-State, and we feel playing a nationally-recognized program like Arizona is a great opportunity for our program and the entire K-State Nation.”

The Wildcats, under hall of fame coach Bill Snyder, open the 2016 season on September 2 at Stanford on the heels of their sixth straight bowl appearance and riding a 27-game home sellout streak. The 2016 season will also mark the completion of Phase IIIB of the Bill Snyder Family Stadium master plan culminating $180 million in improvements to the stadium.