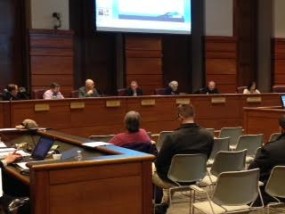 We’ve been hearing a lot lately about the state legislature’s property tax lid provision, which prohibits local municipalities from increasing property taxes above the rate of inflation without a public vote. And now it appears the Riley County Law Enforcement Agency will also be impacted. Law Board member Wynn Butler cautioned this will have to be considered as the Riley County Police Department budget is planned in a few months, saying that has to be the starting point as both the city and county will be constrained by that.
Board member Usha Reddi agreed saying it needs to be looked at with a magnifying glass. And Karen McCulloh weighed in, saying local governments are getting bombarded by the state with activities they are now funding that the state previously funded, with ramifications for the property tax . She added it’s very important to keep the RCPD budget as “lean and mean” as they can.
RCPD Director Brad Schoen indicates he’s already looking into the matter but says they’ll probably have to work through it the next year. That being said Schoen said RCPD can’t go into the budget session with its eyes closed on this matter.
Preliminary budget talks will begin in the spring, with finalization and formal adoption by late June.

Awards were presented to several Riley County Police officials Tuesday, during the Riley County Law Enforcement Agency Law Board meeting. Four of the awards involved the rescue of an individual during a kayaking incident in September of last year, with Dispatch Supervisor Tyler Siefkes, Police Officers Garrett Lloyd and Andrew Toolin, and Sgt. Dustin Weiszbrod acknowledged..

Also receiving an award was Officer Jeffery Childs in connection with the apprehension of a shooting suspect at 11th and Fremont in April.

In other business, Board chair Robert Boyd suggested the expansion of a workmen’s compensation working group set up at an earlier meeting, including Board Member and Manhattan Mayor Karen McCulloh and Riley County Commissioner and Law Board member Ron Wells. Boyd wants to expand the focus to health and liability insurance and to include the city of Manhattan, Riley County, and all the county school districts such as USD 383, 378,and 384.

McCulloh agreed. Board member Usha Reddi agreed it would be good to have everyone at the table.

2015 goals for the Riley County Police Department were reviewed Tuesday by the Riley County Law Enforcement Agency Law Board–with many of them met. However one that was not met was due to a spike in December of 2015 of non-weather animal related accidents, with a goal of keeping it to 13.7 per 1,000 residents. Captain Josh Kyle suggests it’s due to a single factor–inattentive driving.

Law Board member Ron Wells had one suggestion on traffic violations he’s witnessed which involve turning right on red–and that’s stiff fines. RCPD Director Brad Schoen agreed with Wells people’s regard for traffic signals is significantly less than when he was younger.

And after earlier voiced concerns regarding choosing a Riley County Police Officer designated to work with the FBI, RCPD Counsel Mike Gillespie has had a change of heart. Gillespie earlier recommended some clarifications in language before going that direction. But he’s since discussed the matter with FBI authorities.

The earlier concerns involved an indemnification provision regarding the responsibility of the officer with an FBI vehicle. Gillispie suggested the board proceed after final documents are prepared, probably at the February meeting–and it was mentioned RCPD has already  been vetting the position among its staff.