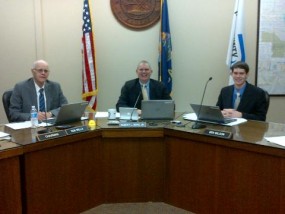 Local leaders haven’t been shy about expressing their opposition to the state-imposed property tax lid that was inserted into last year’s state budget bill well after midnight when Topeka lawmakers needed overtime to pass a budget that raised taxes and failed to balance it anyway.

Half a year later, the state’s bank account continues to run massive deficits and any Kansan that purchases anything from Colby to Kansas City is paying a higher sales tax rate.

County and city commissioners alike have said the intention of the tax lid loses its luster when its source is considered.

Folks in Topeka, they say, from the legislature to the governor, haven’t shown much of an ability to dot their I’s and cross their T’s when it comes to the Sunflower State’s purse strings. So, local leaders argue, why should they attempt to regulate budgets at the local level?

Riley County counselor Clancy Holeman told county commissioners Thursday there are bills in the Kansas House that attempt to either erase the tax lid completely or at the very least, broaden the lid’s exemptions that local governments can keep out of the tax lid equation.

But there’s a senator, Holeman informed, that has introduced a bill to do the exact opposite.

“His improvement is that now it will become effective this July, if it passes,” Holeman said. “And several of the useful exemptions in the current law will disappear.

“There’s very much a double-whammy involved, at least in this one.”

The bill is Kansas Senate Bill 316 and it is being introduced by freshman Pittsburg Sen. Jacob LaTurner, who introduced the original tax lid bill. LaTurner — who was just 24 when he was elected in 2013 — also introduced recent legislation that attempts to protect gun dealers from perceived discrimination.

“In a perfect world, House Bill 2493 would pass,” Holeman said. “But I have no idea how likely that is.”

Holeman told commissioners that now is the time to start considering possible exemptions the county would like to share with the Kansas Association of Counties, who has led efforts to repeal the bill — or at least soften the tax lid’s blow.

Commissioner Ron Wells said what the most frustrating aspect of the bill — and Topeka in general — is that the state implements many laws local governments must follow but fails to fund them. With the tax lid, Wells said Topeka also handcuffs the ability for local government to pay for them.

“That’s super onerous,” he said. “That means the state can do anything they want to, and we can’t raise taxes to cover it.”

“It’s a good way to frame the argument,” he said.

Commissioners also heard from Anne Smith, who is the director of ATA Bus, which provides public transportation in the region through the Flint Hills Area Transportation Agency.

The Kansas Department of Transportation has agreed to fund a new mobility manager position for the growing agency.

After the first year, the county would be required to match 20 percent of the cost for the position.

But with the tax lid situation looming and evolving, Wells — who supports the idea — said he has reservations.

“We don’t know about the tax lid yet,” he said. “But if it takes place July 1 this year, that will certainly have an impact on a lot of things.”

Commissioners later approved the adoption of the Riley County Isolation and Quarantine Plan presented by the county health department.

A full breakdown of Thursday’s meeting agenda and documents — included the full quarantine plan — can be found here.