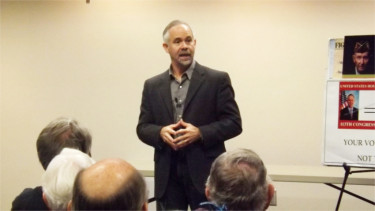 U.S. Congressman Tim Huelskamp of Kansas’ 1st District speaks to the audience in the Manhattan Public Library. Huelskamp held a town hall meeting in the Little Apple on Jan. 19 — his first town hall of 2016. (Staff photo by Brady Bauman)

Congressman Tim Huelskamp’s office has emailed KMAN saying the Lesser Prairie Chicken has been removed from the “threatened list.”

Huelskamps’s office has said he’s been in email contact with a representative from the U.S. Fish and Wildlife Service.

Huelskamp released this statement on the decision from the U.S. District Court for the Western District of Texas:

“For years, I have been leading the fight against the FWS and this nonsensical listing of the Lesser Prairie Chicken. The original decision to list the bird was not based on sound science or the proven success of voluntary conservation, but that didn’t stop the FWS bureaucrats from imposing their decision on our farmers, ranchers, energy producers and other small businesses. I call on the FWS to abandon any appeal of this Court ruling and instead to recognize the continued LPC recovery as the historic drought has hopefully ended and voluntary efforts are working.

“The original listing tactic for the LPC was initiated through a secretive legal action – a method known as ‘sue and settle’ – one in which the government encourages a lawsuit and then secretly settles without public input. Two weeks ago, the House passed a bill I sponsored, H.R. 712, to prevent agencies from undermining current law with this approach.”

Huelskamp’s office also released an email response from a deputy chief of the U.S. Fish and Wildlife Service, though it redacted the individual’s name:

It was good talking with you earlier this morning. Below is some background to respond to your question about the lesser prairie-chicken.

The U.S. District Court for the Western District of Texas has vacated the listing decision for the lesser prairie-chicken. The United States requested the court to modify the judgment, to leave the listing in place on remand for the Service to complete a new rule making. The court has ordered the parties to engage in mediation. As a result of the court’s order, the Service is not treating the lesser prairie-chicken as a species protected by the Endangered Species Act (ESA). We continue to support voluntary conservation efforts that benefit the lesser prairie-chicken and will continue to work with the states, private landowners, other federal agencies, and other partners on these efforts. Interested landowners and industry may enroll in the Western Association of Fish and Wildlife Agencies Range-wide Plan, NRCS’ Lesser Prairie-Chicken Initiative or a Candidate Conservation Agreements with Assurances (CCAAs). CCAAs are available in New Mexico, Texas, and Oklahoma. In addition, an Oil and Gas CCAA is available for companies across the five-state range of the lesser prairie-chicken.

Please let me know if you need anything else.