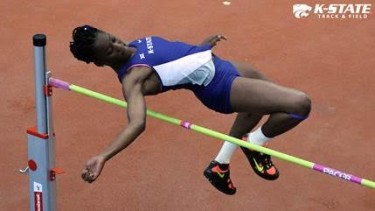 Senior Akela Jones broke school and Ahearn Field House records in the pentathlon as she won the first-ever DeLoss Dodds Invitational pentathlon with a total score of 4,643 points on Friday.

Eyeing the NCAA pentathlon record during the meet, Jones fought until the last event before ultimately coming up just 35 points short of the record of 4,678 points, set by Georgia’s Kendell Williams at last year’s NCAA Indoor Track & Field Championships.

Jones started the event off strong, recording a first-place finish in the 60 meter hurdles with a time of 8.25 and then in the high jump with a mark of 1.85m/6-00.75 to bring her total score to 2,114 points through the first two events of the pentathlon.

Also competing for the Wildcats was junior Adam Deterding. Deterding finished the first day of the Steve Fritz Men’s Heptathlon competition in fifth-place with 2,805 points, just one point behind fourth-place Zack Bornstein of UCLA.

The DeLoss Dodds Invitational is set to continue tomorrow at 9 a.m. with the completion of the Steve Fritz Men’s Heptathlon. Field events will kick off two hours later at 11 a.m., followed by track events which are set to begin at 3:30 p.m.

With the 2016 Olympic Games right around the corner, the meet will provide the opportunity for fans to come and watch 11 K-State Olympic hopefuls compete, including former Wildcat and 2012 Olympic silver medalist Erik Kynard. Head coach Cliff Rovelto, now in his 28th season with the Wildcats, will also be headed to the Olympic Games as an assistant men’s coach for Team USA.