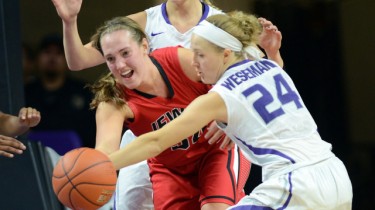 Kansas State used a strong defensive performance and a 13-1 run in the fourth quarter to end a four-game losing streak to secure a 47-44 win over Oklahoma State on Wednesday night at Bramlage Coliseum.

Both teams struggled offensively in the first quarter, as Oklahoma State held a 10-8 lead at the end of the first. The Wildcats shot 25.0 percent from the field, while the Cowgirls were at 35.7 percent. K-State forced six Oklahoma State turnovers in the opening frame.

The Wildcats received a boost off the bench from Jessica Sheble to start the second quarter. Sheble followed an errant shot with a putback and tallied a hook shot on the Wildcats’ next possession to give K-State a 12-10 lead with 8:00 remaining.

After the Cowgirls tied the game at 12, Wesemann connected on her first 3-pointer of the night to give K-State a 15-12 lead with 4:48 to play in the second frame.

A layup from Anna Hammaker gave K-State its largest lead of the night, 22-16, with 1:47 to play in the first half.
Oklahoma State finished the half with consecutive 3-pointers to even the game at 22 at the break.

The teams exchanged points in the early half of the third quarter, with no team leading by more than three.

Oklahoma State broke free with a 6-1 burst and secured a 37-32 lead with 2:05 to play in the third quarter. LaTashia Jones tallied five of the six points for the Cowgirls.

The Cowgirls extended its lead to nine, 43-34, with 7:36 remaining in the fourth quarter.
From the 7:35 mark to the final horn, K-State outscored the Cowgirls, 13-1, to secure its first league win of the season.

The K-State rally received a kickstart from Wesemann, as she drained her second 3-pointer of the night to bring K-State to within six, 43-37, with 7:14 remaining.

Four free throws from Wesemann and Megan Deines pulled the Wildcats to within three with 3:24 remaining.

Wesemann brought the crowd to its feet with her third 3-pointer of the night to tie the game with 2:08 to play.

Lewis followed her own miss with a minute to play to put in a layup and give K-State a 46-44 lead.

After Wesemann made one of two from the foul line with 29 seconds left, Oklahoma State had three opportunities to tie the game but the Cowgirls missed all three attempts including one by a block from Deines with 10 seconds remaining.

The Wildcats outscored the Cowgirls in the paint, 24-18.

K-State concludes a two-game home stand on Saturday, as the Wildcats host TCU at 7 p.m. Saturday’s game is K-State’s “Pack the House” game, as all tickets are available for $1.