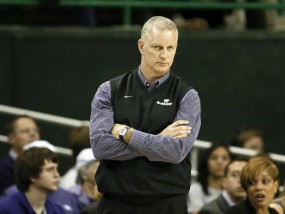 NORMAN, Okla. – With a strong effort in the second and third quarters, Kansas State was able to draw to within four of (17/19) Oklahoma at the Lloyd Noble Center on Sunday, but K-State was unable to overtake the Sooners and snap its losing streak falling, 68-58.

K-State held a 5-4 lead in the early stages of the first quarter, but Oklahoma used a 12-0 run to take control of the opening quarter and lead 22-8 after one.

The Wildcats were 3-of-12 from the field with seven turnovers in the first quarter.

Oklahoma reestablished its lead into double figures with a 7-2 run to lead 32-19 with 2:03 remaining.

Erica Young tallied the final three points of the second quarter to bring K-State to within 10 at the half, 32-22.

Both teams were turnover prone in the first half, with K-State recording 12 and Oklahoma carding 11.

Lewis scored K-State’s first six points of the third quarter to pull the Wildcats to within seven, 35-28, with 7:17 to play.

K-State’s defense rose to the occasion in the third quarter, holding Oklahoma to one made field goal in the entirety of the quarter. The Wildcats outscored the Sooners 13-9 in the third frame.

Kindred Wesemann drained her second 3-point field goal of the game to bring K-State to within four, 46-42, with 8:18 remaining in the fourth quarter.

Kayla Goth answered with five points of her own to pull K-State back to within four, 51-47, with 5:52 to play. Goth finished the game with a career-high seven points.

The Wildcats were within four following two made free throws from Wesemann, but Oklahoma answered with a 3-pointer from Derica Wyatt with 4:14 to play to build the lead back to seven.

Kaylee Page drained a three-pointer from the far corner to bring K-State to within four, 62-58, with 43 seconds remaining.

The Sooners sealed the win from the free throw line in the final 30 seconds for the final advantage of 68-58.

K-State forced Oklahoma into 25 turnovers, while the Wildcats only had 16.

Deines notched her eighth double figure scoring effort at K-State. She pocketed a career-high six steals. This was her third effort with two or more steals this season.

K-State begins a two-game home stand on Wednesday, as the Wildcats host Oklahoma State at 7 p.m.