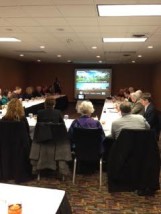 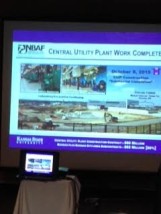 They’ll be pouring concrete at the NBAF site in Manhattan for the next two and a half years…but it’s all good, according to Ron Trewyn, K-State’s liaison to the large Homeland Security project…Currently there are 80-100 construction workers at the NBAF site–but that number could approach a thousand in a few years.

Where will those folks live while working in Manhattan? That was one question asked at Monday’s intergovernmental meeting, with Trewyn indicating that’s a question for the Department of Homeland Security, but he says they’ve been working on that and consider it workable.

Trewyn says the work is either on schedule or ahead of the construction timeline. He told the intergovernmental group the proximity to the veterinary college was just one dynamic that contributed to the selection of Manhattan as the site for NBAF, and added officials were also very impressed with area law enforcement and teamwork with other local emergency groups.

The Kansas Association of Realtors has already approached state legislators with proposals regarding property taxes and valuations–and the two county officials are concerned about that.  Proposals include placing limits on property tax distribution for taxes paid under protest, placing an annual cap or limit on the amount of assessed valuation increase, and making changes in devoted agriculture use requirements…to name just a few.

McHenry adds the county is not a fan of that, as they feel they already have a proven track record with a good system, in which the performance of the appraisers and appraisals are measured very tightly. And McHenry says appraisers state-wide are already trying to do things very fairly.

While not able to give an exact figure, McHenry warned the intergovernmental leaders anytime there’s legislation such as this it can potentially impact the revenue stream of the city, school districts throughout the county, the county itself, and all the services and agencies dependent on those revenues.

Also making a presentation at Monday’s intergovernmental meeting was Dr. Sue Peterson of K-State, who serves as Director of governmental relations
and Assistant to the president. Peterson described the proposed budget document as more of a political statement, and indicated the revenue picture will be changing month to month.

The Monday meeting had a full crowd with representatives from K-State, the city of Manhattan, Riley County, Fort Riley, USD 383, and area Congressional office staffers.