WICHITA – A criminal charge filed Friday alleges a Newton woman unlawfully transferred guns to a convicted felon who was killed Thursday in a shootout with police in Hesston, U.S. Attorney Barry Grissom said in a press release sent to KMAN.

Sarah T. Hopkins, 28, is charged with one count of knowingly transferring a firearm to a convicted felon. An affidavit filed in the case alleges Hopkins knew Cedric Ford was a convicted felon who was prohibited from possessing a firearm when she gave him a Zastava Serbia, AK-47 type semi-automatic rifle and a Glock Model 22 40-caliber handgun.

Cedric had the guns when he was shot and killed by police Thursday after they were called to a shooting incident at Excel Industries in Hesston.

HESSTON — The Latest on the attack at a central Kansas factory (all times local):

More information is being released about the criminal history of the man who killed three people and injured 14 during a shooting rampage that ended at a factory in Newton, Kansas.

Authorities on Friday said 38-year-old Cedric Ford had a history of domestic violence, including an arrest in Newton in November 2008 for felony battery and disorderly conduct. He also was arrested in July 2010, for driving while intoxicated and obstruction.

Ford also was required to take an anger management class in Harvey County in 2008, after he was convicted of disorderly conduct. The Hutchinson News reports court records show he completed the course.

Harvey County Sheriff T. Walton said Thursday that Ford had been served with a protective order shortly before the shooting at the plant.

A 31-year-old man killed during a shooting rampage at a Kansas factory is being remembered as an engaged car lover, avid fisherman and a devoted father to his 4-year-old son.

Josh Higbee died Thursday during the mass shooting at the Excel Industries plant in Hesston, where he was a welder. The gunman was killed by police.

His sister-in-law, LaShonda Hinson, tells the Wichita Eagle (http://bit.ly/1Qm2Y9D ) that Higbee “was taught to be a very loving, kind man,” and that he adored his young son.

The newspaper says Higbee was adopted into the Hinson family when he was 2 years old. His brother, Nathaniel Hinson, tells the paper Higbee was always known as a “Mr. Fix-It.”

Authorities have identified the three people killed during a shooting at a Kansas factory.

The dead were 30-year-old Renee Benjamin, whose hometown was unavailable; 44-year-old Brian Sadowsky of Newton; and 31-year-old Josh Higbee of Buhler.

The three were killed when Cedric Ford randomly shot at people while driving and when he got to the Excel Industries plant on Thursday evening. Hesston Police Chief Doug Schroeder shot and killed Ford inside the plant.

At least 14 people were wounded.

A Kansas judge issued a temporary order of protection earlier this month against the man accused of killing three people and wounding 14 at a Kansas factory.

Sedgwick County records show that a woman sought an order of protection against a Cedric Spain on Feb. 5. But when a judge issued the temporary order that day, he filed it against Cedric Ford and listed Ford’s address at the Excel plant.

President Barack Obama says the U.S. cannot become numb to mass shootings occurring once a week in the U.S.

Obama offered his condolences to the victims and families affected by Thursday’s attacks at a factory in Hesston, Kansas. He says he spoke with Hesston Mayor David Kaufman to convey his sympathies.

The president noted that the Kansas attacks follow a rampage last weekend in Kalamazoo, Michigan.

Obama says Congress has no appetite to do something about gun violence, but the U.S. needs a Congress that does.

The president says the real tragedy is that this kind of violence has become routine. He spoke in Jacksonville, Florida, during an event about the economy.

Kansas Gov. Sam Brownback says preliminary information indicates Hesston Police Chief Doug Schroeder is the one who shot and killed the gunman suspected of killing three people at a factory.

The governor says Schroeder didn’t wait for backup and “seized the situation.” He says “without his aggressive response,” more people would have been at risk.

According to Schroeder’s LinkedIn page, he’s been chief of Hesston since 1998.

The Facebook page of a Cedric Ford who worked at the Kansas factory that was the scene of multiple shootings includes pictures of a man posing with a long gun and another of a handgun in a man’s lap.

Authorities say Ford is the man who shot 15 people, killing three, at the Excel Industries plant Thursday in Hesston. He was shot and killed by a police officer.

Recent posts on the Facebook page also include music videos of rappers in Miami, photos of cars and pictures of a trip to the zoo with children posted in January.

The last posts were on Tuesday, including one where Ford says “Woke up this morning vibing God is good.”

Kansas Gov. Sam Brownback plans to visit the town where a gunman shot 15 people, killing three before he was fatally shot police.

Brownback says in a statement that he, Attorney General Derek Schmidt and the head of the Kansas Highway Patrol would meet with law enforcement officials Friday in Hesston.

The governor called the shooting at the Excel Industries lawnmower parts plant a terrible tragedy. He also praised the law enforcement community that responded.

He also says it’s a time to offer prayers and comfort to the community and not a time to discuss stricter gun control.

A man whose son was wounded in an attack at a Kansas factory says his son told him that when the shooting started, people were yelling “gas fire, gas fire.”

Dennis Britton Sr. says his son, Dennis Britton Jr., said he stepped away from his welding bay Thursday at the Excel Industries lawnmower parts factory in Hesston when somebody hollered at him. He says his son heard a pop and then went to the ground.

Britton Sr., who is also a welder at the factory, says his son’s right leg was severely fractured by a gunshot and that he’s being treated at a hospital in Wichita, which is about 30 miles south of Hesston.

Authorities say Cedric Ford wounded three people before he stormed into the plant and shot 15 more, killing three of them. A police officer shot and killed Ford during a shootout. 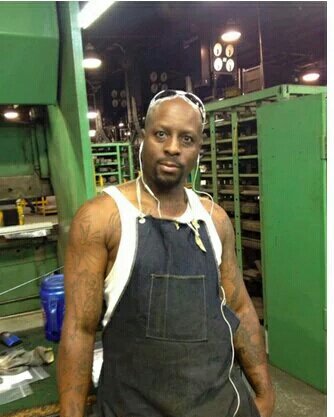 A co-worker says the man who attacked the Kansas lawnmower parts plant left work early without explanation before showing up hours later armed with a rifle.

Matt Jarrell says he and 38-year-old Cedric Ford worked “hand-in-hand” as painters on the second shift at the Excel Industries factory in Hesston. He says Ford arrived as scheduled on Thursday but later disappeared and wasn’t there to relieve him so that he could take a break.

Jarrell told The Associated Press on Friday that someone else eventually spelled him and that he was sitting in his truck in the parking lot when he saw Ford drive up in a truck that wasn’t his. Jarrell says he sped away when he saw Ford shoot someone and then enter the building.

Authorities say Ford wounded three people before storming into the building and shooting 15 others, killing three of them. A police officer killed Ford during a shootout.

Authorities have identified a man who opened fire on the central Kansas factory where he worked, killing three people and wounding many others, as 38-year-old Cedric Ford.

Harvey County Sheriff T. Walton said Friday that Ford was served with a protection from abuse order about 90 minutes before the attacks began Thursday evening. He says Ford shot and wounded three people before storming the Excel Industries lawnmower parts factory in Hesston and shooting 15 others, killing three of them. A police officer killed Ford during an exchange of gunfire.

Public records show that Ford has several previous offenses in Florida over the last decade, including burglary, grand theft and fleeing from an officer. Online records show he was released from the custody of the Florida Department of Corrections in February 2007.

In Kansas, he had a misdemeanor conviction in a 2008 fighting or brawling case and various traffic violations from 2014 and 2015.

A sheriff says the police officer who shot and killed a gunman who was attacking the central Kansas factory where he worked is a “tremendous hero.”

Harvey County Sheriff T. Walton said Friday that had the Hesston police officer not killed the man during the Thursday evening attack at the Excel Industries lawnmower parts plant, it “would be a whole lot more tragic.”

He says there were still 200 or 300 other people in the factory and that “the shooter wasn’t done by any means.”

Walton didn’t identify the officer or the attacker.

Authorities say the attacker shot and wounded three people before storming into the factory, where he shot 15 others, killing three of them, before the officer killed him.

Authorities say a man who opened fire on the central Kansas factory where he worked was served with a protection from abuse order shortly before the attack.

Harvey County Sheriff T. Walton said Friday that the sheriff’s office served the suspect with the order at around 3:30 p.m. Thursday and that he thinks it was likely what triggered the attack, which began about 90 minutes later.

He says such orders are typically served “because there’s some type of violence in a relationship,” but he declined to specify the nature of the relationship in question or to disclose the attacker’s name.

Pickett says the suspect shot two people while driving to the Excel Industries plant in Hesston where he worked and shot another person in the parking lot before going inside. He says the man shot 15 others in the lawnmower parts factory, killing three of them, before a Hesston police officer shot him dead.

Activist offers to pay for Kansas’ recount of abortion vote