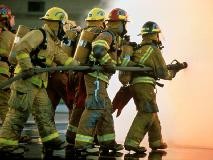 Riley County firefighters had a very busy Sunday, with one fire burning about 55 acres off I-70. Fire Chief Pat Collins tells KMAN the call came in just before 10 p.m. at Milepost 320 on I 70. A car that was on fire pulled off on the north shoulder of the West bound lane and caught the ditch on fire, which spread to 55 acres. 20 trucks and 44 firefighters were called in from the Riley County Fire Stations of Konza Station, Hunters Island, Zeandale, Tatarrax and Tuttle Cove. Also assisting were Wabaunsee Fire including Wabaunsee and Alma, Geary County Fire, McDowell Creek’s  Main station, and Ft Riley.
The vehicle was a total loss and no one was hurt. Everyone was back in their stations by 2:00 Monday morning.That was the fifth fire of the day for some of the Riley County Firefighters.