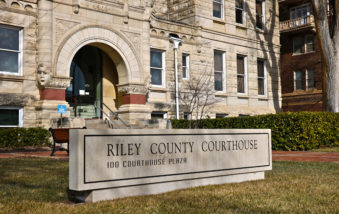 TOPEKA, Kan. (AP) A Navy veteran seeking to get five of his children back from state custody in Kansas says his use of medical marijuana to treat PTSD not the family’s past scrapes with the law prompted the state’s action. The case originated in Riley County.

Raymond Schwab has campaigned on the Statehouse steps to get his children back, and drawn national attention as medical marijuana proponents describe the case as an example of government overreach.

The Schwabs declined to name who it was that reported them, but someone took their children to the police in Riley County, saying they were abandoned. There were allegations of emotional abuse, based on the fact that the children were homeschooled and not vaccinated according to the CDC schedule.

State officials have declined to specify why the children were removed, but say Schwab isn’t telling the truth about it being because of marijuana.

Police and court documents show in the five months before it occurred, Schwab’s wife was arrested for domestic battery and hospitalized for mental health issues, and police were called to their home for a domestic disturbance.

Schwab just ended a more than two week hunger strike with the arrival of a civil rights lawyer from Los Angeles who has now filed a lawsuit against the Kansas Department of Children and Families.