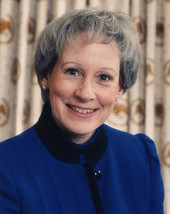 In 1978, Kassebaum Baker, then Nancy Landon Kassebaum, became the first woman from the state of Kansas to be elected to the Senate, and only the second woman in the nation to be elected in her own right. During her 19-year tenure as a senator, Kassebaum Baker served on the Foreign Relations Committee, the Budget Committee, the Commerce Committee, and Labor and Human Resources Committee. She was a supporter of the Equal Rights Amendment, gun control and a woman’s right to choose an abortion. Declining to run for a fourth term in 1996, she went on to serve on several nonprofit boards, including the Robert Wood Johnson Foundation and the Kaiser Family Foundation. She is past chair of the National Advisory Committee on Rural Health and the George C. Marshall Foundation. She helped secure the acquisition of the Tallgrass Prairie National Preserve in 1996-2004.

In 1996, she married Howard Baker, former U.S. senator from Tennessee and Senate majority leader, who also served as chief of staff under President Reagan. They divided their time between her farm in Morris County, Kansas, and his home in Huntsville, Tennessee. From 2001-2005, they lived in Tokyo where Baker served as U.S. ambassador to Japan. Kassebaum returned to her Kansas home after his death in 2014.

Her ties to Kansas State University date from 1966 when the Landon Lecture Series on Public Issues was inaugurated as a tribute to her father, former Kansas Gov. Alfred Landon. Her four children are also Kansas State University alumni. In 2015, Kassebaum Baker was awarded an honorary doctorate from K-State, one of the highest honors the university can bestow.

The Women’s Studies Advisory Board consists of alumnae and local business, academic and community leaders. It was founded in 2009 to support the mission of the women’s studies department. In 2011, after a successful fundraising campaign, the board awarded the first annual Women’s Studies Advisory Board Endowed Scholarship for Academic Excellence to the outstanding junior in women’s studies. The board is currently fundraising to establish a new scholarship to be awarded to a student in women’s studies with financial need.

The board established the Women’s Studies Advisory Board Lecture Series to provide a venue for distinguished speakers to educate the campus and community about women’s achievements and challenges, and to provide examples of outstanding scholarship in women’s studies. Kassebaum Baker is the seventh speaker in the series.

The women’s studies department is part of the College of Arts & Sciences.