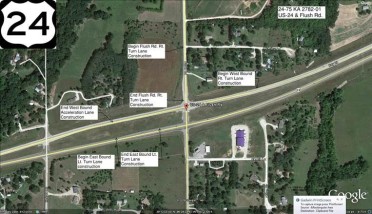 On Monday, April 11, weather permitting, an intersection improvement project will begin at the U.S. 24 and Flush Road junction in Pottawatomie County. Project work includes the addition of turning and acceleration lanes on U.S. 24 and a turn lane on Flush Road. Work will take place during daylight hours, Monday through Friday, with some occasional Saturday work.

Beginning on Monday, April 11, westbound U.S. 24 on either side of the Flush Road intersection will be reduced to one open lane for construction of the new lanes. Additional lane closures will take place at the intersection throughout the project as needed. Flush Road on the north side of the U.S. 24 intersection will be closed to all traffic 24/7, round the clock, from Tuesday, July 5 through Monday, August 1, weather permitting, for construction work on the new turn lane.

IMPORTANT NOTE: Located just east of the Flush Road intersection, Rockingham Road on the north side of the U.S. 24 intersection will also be closed to all traffic, 24/7 round the clock, for improvement work by Pottawatomie County Public Works on Monday-Friday, April 11-15, weather permitting. There will be no impacts to through traffic on U.S. 24. Drivers will need to use alternate routes during this week-long closure.

Advance message boards will alert traffic to the lane and intersection closures. Traffic will be directed through the project work zone via signage, barricades and cones. Drivers should expect delays during peak commute times and are encouraged to use alternate routes, as needed. There will be a 40 mph posted speed limit and a 12-foot lane width restriction on U.S. 24.

The Kansas Department of Transportation urges all motorists to be alert, obey the warning signs, and “Give ‘Em a Brake!” when approaching and driving through the project work zone.

Amino Brothers (Kansas City, KS) is the primary contractor on this intersection improvement project with a total contract cost of $969,818. Project work is scheduled to be completed in mid-August 2016, weather permitting.

This project is funded by T-WORKS, the transportation program passed by the Kansas Legislature in May 2010.