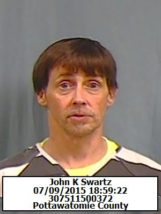 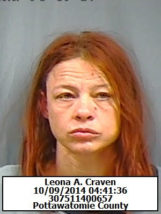 Sheriff’s Office with the assistance of the Wamego Police Department executed a search warrant in a hotel room at a Wamego Motel, on Highway 24.

Deputies seized unspecified quantities of methamphetamine, marijuana, as well as drug paraphernalia and scales. The occupants of the room had left prior to the search warrant however warrants have been issued for the suspects. The Pottawatomie County Sheriff’s department asks for assistance in locating Leona Craven, 39, who has been known to be in Louisville area and wanted for distribution of controlled substances.

The second suspect is listed as John Swartz, 45, with a last known address of Manhattan and wanted for the same charge.

Anyone with information on the whereabouts of John Swartz or Leona Craven is asked to contact the Pottawatomie County Sheriff’s Office at 457-3353 or their local law enforcement agency.

Jeroid Garcia, 25, and Nicole Jackson, 22, both of Topeka, were arrested for Possession of Marijuana and Possession of Drug Paraphernalia.

All four of these person are currently confined at the Pottawatomie County Jail pending bond being set.
###
And the sheriff’s department responded to a high risk traffic stop in the vicinity of Say Road early Thursday morning. No further information is available at this time but the Sheriff indicates there was no public danger involved.