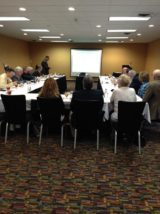 Manhattan officials are putting a speakers’ bureau together to make presentations on the city’s proposed street maintenance sales tax–and City Public Works Director Rob Ott was serving in that role Monday before intergovernmental leaders.
Ott adds the measure will be on the November general election ballot…
Ott told the group need versus want is one area they’re looking at closely with prioritization suggested by some in attendance.

Ott says the ballot language has two components–one involving the street maintenance repair program including the cost and rebuilding rehab of existing city streets. The second component is the Safe Route to schools–with gaps in projects at various schools inside the city limits. Ott told the group need versus want is one area they’re looking at closely with prioritization suggested by some in attendance.

Ott indicates he felt he got good feedback from the intergovernmental group Monday, with questions and suggestions from several at the meeting.

In just a few days (April 30th), Governor’s Military Council Executive Director John Armbrust of Manhattan will spend his last official day in the position he’s held for a number of years. He’s been making his good-byes the past few weeks, and addressed the intergovernmental meeting Monday.

Armbrust adds until General Perry Wiggins is able to take over in the fall, he will continue to handle a few smaller projects. Armbrust asked for continued support and warned of continuing areas of concern such as base realignment and closure or down-sizing, telling the group while the world continues to be a difficult place, the money is not there for continued funding.

Armbrust said thank you to intergovernmental leaders during their meeting Monday, telling the group a great deal’s been accomplished when it comes to Fort Riley and military relations during his long tenure in the position.

Armbrust adds BRAC issues need to be watched carefully. The outgoing executive director admitted to the group that Fort Riley doesn’t rank well when it comes to its distance to ports and it’s training size–adding the area needs to continue to tell the right story when it addresses military officials in Washington D.C.