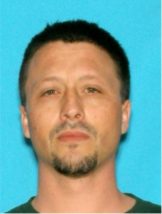 A Manhattan man will serve nearly three years in prison on charges which include burglary and forgery. Brian Duzan was sentenced to 32 months in Pottawatomie County Court Thursday  for burglary, with an eight month sentence for forgery, and some county time on misdemeanors–all to serve concurrently.
Duzan was taken into custody after a nine hour search January sixth with police finding him in the ceiling at All American Garage Doors and Windows at 503 Lincoln in Wamego, where the burglary occurred.