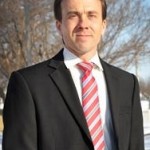 TOPEKA, Kan. (AP) – An educator and farmer who previously ran against congressman Tim Huelskamp as a Republican is now planning to run in the 1st District of Kansas as an independent candidate.

Alan LaPolice of Clyde announced Thursday that he is leaving what he called a failed political system to run as an independent. He said outsiders must get elected to change Washington.

He received 45 percent of the vote against Huelskamp in the Republican primary in 2014.

But this year, Great Bend physician Roger Marshall already has filed to run against Huelskamp in the GOP primary.

Huelskamp is a tea party favorite who is seeking his fourth term in the 1st District, which covers western and central Kansas.