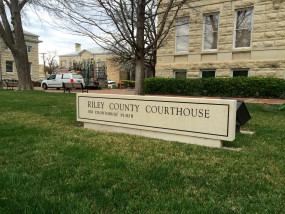 Outgoing Riley County District Court Judge David Stutzman has ruled on pretrial motions filed in a second degree murder case involving Joshua Mall of Riley. The Judge agreed to the State’s motion to admit evidence of prior convictions and denied the defendant’s motion to suppress the blood alcohol test in the case.
As KMAN earlier reported, the state alleged during the motions hearing that Mall was driving with a blood alcohol content of .13 when he collided with another vehicle and then struck a tree on the evening of October fifth 2015 in the 2400 block of Tuttle Creek Boulevard with his daughter Madilyn in the truck.
Judge Stutzman indicates in the present case, the proposed evidence is based on the Defendant’s prior record of driving offenses, in the context of allegations that intoxication and speeding were also present. An earlier court ruling referenced by Stutzman points to establishing  the defendant had grounds to be aware of the risk his drinking and driving while intoxicated presented to others and he says It is for that purpose the state’s motion should be granted and the proposed evidence admitted. However, Judge Stutzman adds a limiting instruction must be given, directing that the jury may consider this evidence solely for the purpose of deciding whether the state has borne its burden of proof to show Mall acted recklessly under “circumstances manifesting extreme indifference to the value of human life.”
As for the blood alcohol test, Judge Stutzman describes the decision to order the blood draw was reasonable and that the procedures for extracting the blood were also reasonable.