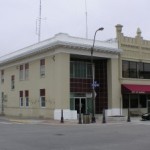 The Wamego City Commission approved proposals on several projects.  At Tuesday’s meeting, City Manager Merl Page introduced the amendment to the security project proposal for architect services from Architect Bruce McMillan.  Page reviewed the proposal for the pre-qualification fee structure, which involved additional cost to the original proposal.   McMillan said all the contractors are pre-qualified, which adds a level of security for the staff by having contractors that are qualified to work with the type of security products of this project.  The Commission unanimously approved the amendment to the original agreement adding the cost of $8,000 to the contract.

The Wamego City Commission heard more annual reports. At Tuesday’s meeting, Chamber of Commerce Executive Director Megan Umscheid went over the accomplishments of the 2015 annual reports of both the Chamber and the Convention and Visitors Bureau (CVB). She cited the addition of 35 new members in 2015 bringing the membership to over 200. 2015 also saw the collaborative funding partnership between the City and the CVB Tourism Coordinator Position, where the City pays half of the salary of this position.

In addition, Umscheid gave an overview of the two new programs initiated in 2015. Peer Chamber and Youth Entrepreneurs began in August of 2015, and has over 40 high school junior and senior members interacting with local business professionals on a monthly basis.

The CVB received over $50,000 from Kansas Sampler proceeds and reimbursements. They granted out a portion to the OZ Museum, the Veterans Memorial , the Columbian Theatre and a portion for Cooperative Marketing Grants.

The Wamego City Commission addressed the request from the 150th Celebration committee.  At Tuesday’s meeting, committee members gave an overview of the events planned in the coming months, and one plan is for a Beer Garden.  They proposed the City apply for the one-day liquor license and secure the liability insurance associated with the event.  After a lengthy discussion, City Manager Merl Page suggested the committee secure a caterer, who would be the best fit and could easily secure the required license, insurance and assume the liability for the inventory.  The committee will go back revisit the suggestion, with Page checking further and getting back to the group within the next week.  Timing is an issue here.