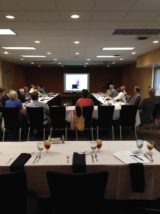 Wise stewardship of resources was one of the main topics presented at Monday’s intergovernmental meeting in Manhattan, with K-State Vice President for Human Capital Services Cheryl Johnson addressing the group. Johnson says the university has reduced its previous 139 steps to make a hire down to under 60.
Johnson indicated the bottom line prior to the change was that no one person had a handle on the hiring process…and they were so busy chasing paper no one stepped back to see the entire system. She also mentioned applicants now having the option of social media, including Facebook.
Manhattan Finance Director Bernie Hayen also presented a budget update, with possible mill levy rates being considered. Manhattan Mayor, Usha Reddi says USD 383 is also vulnerable to the uncertainty in Topeka. 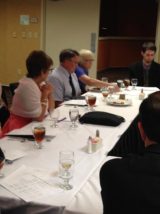 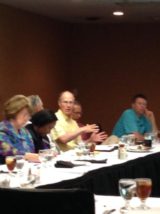 Commissioner Karen McCulloh referred to “London bridge is falling down” during Monday’s intergovernmental meeting, saying everybody around the table is seeing higher costs with the state “in dire shape.”

Riley County Commissioner, Robert Boyd spoke yesterday at the Intergovernmental meeting about the County’s ongoing budget session and the challenges presented by the looming property tax lid. Boyd told KMAN following the meeting, the Commission has made a commitment to increasing its contingency funds. And Boyd says the judicial branch has taken “a real beating” over the last decade with no pay raises and no budget increases.

The monthly intergovernmental meeting includes representatives from K-State, Riley County, the city of Manhattan, USD 383, Fort Riley, and the Manhattan Area Chamber of Commerce. More on the meeting can be viewed on our website at newsradiokman.com.