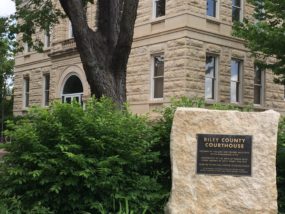 Fieldhouse Development owner Zachary Burton made his first appearance in Riley County District Court Wednesday afternoon on four counts of unlawful sexual relations with a female student. The 38-year-old Burton was an assistant boys’ basketball coach and substitute teacher with Riley County’s USD 378 and faces the felony charges which list four different counts during slightly different time frames– all four beginning  December 1, 2015 but each with different ending dates of December 31, 2015, January 31, 2016, March 31, 2016, and May 9, 2016. Burton’s last day as a substitute teacher was May 9.

Burton’s next court date was set for July 5, but during the court appearance Wednesday he was ordered to have no contact, directly or indirectly, with the alleged victim. Senior Deputy County Attorney Barry Disney requested the no contact order, stressing he was not implying there had been any such contact.

Defense Attorney Jeremy Platt represented Burton Wednesday, but Barry Clark was mentioned as being his defense attorney of record. Clark and Disney’s names are on a previous court order which sealed the affidavit supporting the arrest of the defendant, due to concerns listed by the court that disclosure has the potential of jeapordizing the well-being of the victim.