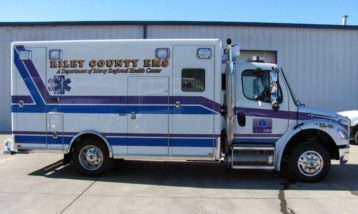 The address of a medical response early Tuesday reportedly involving a woman trampled by cattle has been released… as 11,970 Baldwin Park Branch, owned by Terry and Barbara Zimmerman. However KMAN has not been able to confirm the identity of the woman trampled who was sent by Lifestar to Topeka. Riley County EMS Director Larry Couchman indicates it was a female patient in her 40’s transported based on the mechanism of her injuries. Couchman adds she was in stable condition with orthopedic related injuries.
As KMAN earlier reported, at approximately 7:50 a.m. Tuesday Riley County Police  Dispatch received a call regarding an adult female with injuries as a result of being trampled by an unknown number of cattle. A police officer responded to provide assistance if necessary, however, the call was medical in nature and dispatch contacted EMS. Again the incident happened in the northern part of the county near Randolph in the 11,000 block of Baldwin Park Branch on property owned by Terry and Barbara Zimmerman.