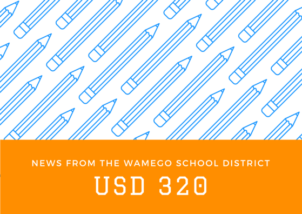 Wamego’s USD 320 Board of Education went through the reorganization process for the new 2016-17 school year.  The Monday meeting opened with the election of Board Officers.  Board member Amy Schwein was not present.  Rob Adams was re-elected as President by a vote of 5 to 0 and Ryan Hergitt was elected Vice President by a vote of 3 to 2.

Reorganization of the board continued with the approval of a resolution to extend the term of office of board members whose term expires anytime in 2017 until the second Monday in January of 2018.  This affects District 4 (Amy Schwein), District 5 (currently vacant) and District 6 (Rob Adams).

All resolutions were adopted by a vote of 5 to 0.

In addition, President Rob Adams said there was one letter of interest in the District 5 Board position recently vacated by Joe Steele. Robert Pettay, Director of Kinesiology at K-State authored the letter of interest. He cited his four children, his background in education, and the opportunity to maintain and improve the standards of education at the interview. The Board unanimously approved Pettay for the District 5 position, which will expire in January 2018.

In other business, the Board heard proposed improvements to Say Road from Pottawatomie County Director of Public Works, Peter Clark. Clark said Say Road is part of the County’s 5-year plan, and asked the District to grant a 20’ easement to the County for the installation of a temporary wood-chip trail along the south side of the road. This easement borders the North side of the Middle School property and would provide safe access to the students in the area to get to school. The Board authorized Board President Rob Adams to sign the grant document, which he will study further before signing. The 5-year plan for Say Road is to pave or chip and seal the half-mile portion of the road from Columbian to Kaw Valley Road.

Wamego’s USD 320 Board of Education reviewed the proposed bond issue. Superintendent Winter went over a consolidated list of the scope of work for the bond issue. He stated he was in favor of removing certain components of the listing in order to add more needed projects. The item not listed in the original listing was building security at all the buildings. Winter feels building security at the High School is more important than remodeling the upper gym restrooms ($78,000). He said school safety is of public interest. Currently, the High School has no security systems in place. Other USD 320 buildings have some security systems in place but are not fully secure.

The Board will be studying the listing of the bond issue inclusions to be ready for the July 25th Budget Publication meeting. After consolidating the list of projects within the District that need attention, the total came to $19,947,700. The Board is proposing a $20,000,000 bond issue, which will not increase the mill levy. The Board pared down the original list of needed improvements in order to keep from causing an increase in the mill levy.