After months of stakeholder meetings and data gathering,  a company that has been studying the impact of downsizing at Fort Riley on the area community shared its findings Friday in Manhattan. The Matrix Design group was hired to conduct the study as part of a grant obtained by the Flint Hills Regional Council.
Matrix Executive Associate Charlie Perham spoke with the group about the importance of state level advocacy, a talent pipeline, leverage through an economic development district designation, regionalism, and economic diversification.
He tells KMAN “We’re in the beginning stages of the focus area of the recommendations, ” adding the meetings are important to get “feedback from the communities and just let them know where we think we’re headed.” Education, housing, and care for soldiers and their families are also key components, according to Perham.
One key point made by Perham is Fort Riley contributes about half of the local economy in the region.
Council Executive Director Gary Stith was pleased with the preliminary recommendations by the Matrix group, saying “this study is going to be very helpful to us in understanding what our opportunities are in the future and how to deal with changes.
Governor’s Military Council acting Executive Director John Armbrust tells KMAN he thinks the design group is right on track “when they talk about what the potential downsizing could mean to the community and then come up with recommended avenues that we might try to mitigate that .
Manhattan City Manager Ron Fehr was also in attendance and found the meeting valuable, saying while some of it he already knew but it’s always “important to hear often–and that is the financial impact that Fort Riley has on this region.
Similar meetings were also held in Junction City earlier in the week, with very good attendance reported there. 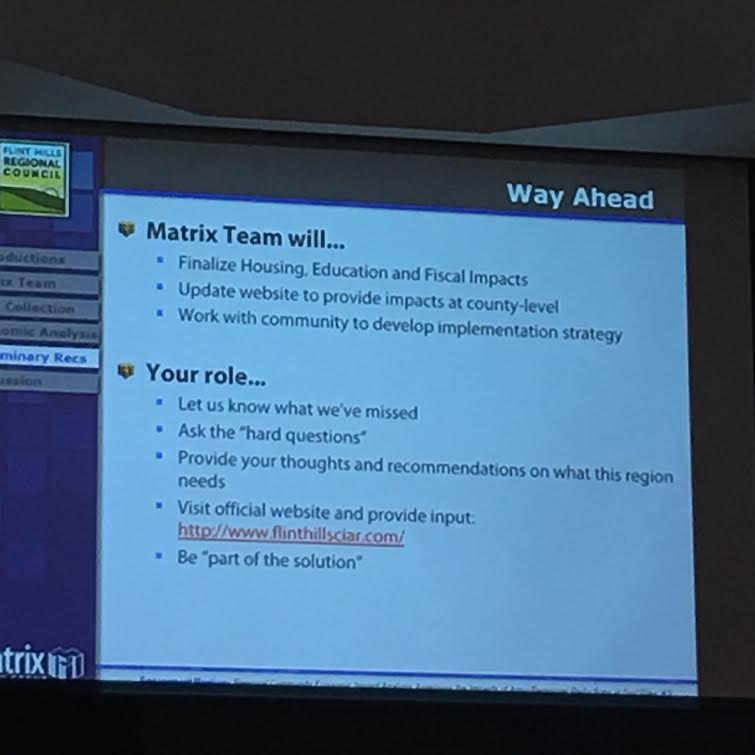