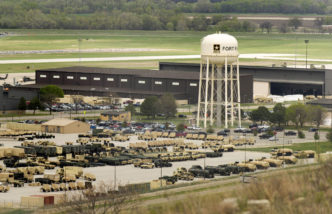 A 19-year-old defendant pleaded guilty Monday to a charge of involuntary manslaughter in the shooting death of a 16-year-old boy on Fort Riley, Acting U.S. Attorney Tom Beall said.
Juwuan D. Jackson, 19, who lived on the Fort Riley base at the time, pleaded guilty to one count of involuntary manslaughter. He admitted that on Sept. 11, 2015, he handled a firearm in a reckless manner, resulting in the shooting death of 16-year-old Kenyon Givens, Jr., who also lived on Fort Riley.
At Monday’s hearing, prosecutors said when military police responded to the shooting Jackson told them an unknown intruder wearing a mask had forced his way into the home and shot Givens. Paramedics were not allowed to enter and treat Givens until military police had searched the house for an intruder. At the same time, police began searching the neighborhood to find the weapon and the masked shooter.
Investigators eventually learned that Jackson had been playing with a loaded .22 caliber handgun before the shooting. Jackson spun the chamber while holding the trigger. The revolver discharged and a bullet struck Givens in the chest.
Sentencing is set for Jan. 11. Jackson faces a maximum penalty of eight years in federal prison. Beall commended the Army Criminal Investigations Division and the FBI, Special Assistant U.S. Attorney Robin Graham and Assistant U.S. Attorney Tony Mattivi for their work on the case.