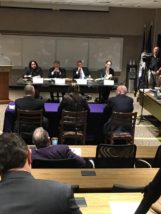 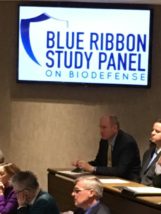 While the Blue Ribbon Study Panel on Biodefense questioned a number of scientists, academic leaders, legislators, and industry representatives at Kansas State University Thursday, local Biosecurity Research Institute Director Dr. Stephen Higgs turned the tables a bit, asking the panel a question following his portion of the discussion. Higgs asked what next and Blue Ribbon Panel member and Former Senate Majority Leader Thomas Daschle responded that with the new administration there is a potential for new emphasis and energy. Daschle says the hope is to release a second series of recommendations by the end of the year. He says the group will be putting as much emphasis as it can on action and on organization as well as response in Congress, and working with the new leadership in this administration.
Other Blue Ribbon Panel members, including former Homeland Security Advisor Kenneth Wainstein, also talked about having the necessary leadership and coordination of  the overall effort, with a threat that needs to be handled at all levels of government and the need for the federal government to take a stronger leadership role.
Biosafey Level Four facilities were discussed during the visit -and not surprisingly the National Bio and Agri-Defense facility to be located near K-State came up during that discussion, with  Higgs telling the group NBAF is so much more than Plum Island, adding substantially a new capability in the United States that “we so desperately need.” Higgs also responded to four representatives of the panel regarding better coordination of different facilities and possible duplication, saying some duplication is not a bad thing as you “don’t want to put all your eggs into one basket.”
There was also talk of research centers, which can be very productive but a huge investment–and without continuing funding it’s difficult to sustain those centers. That was just one of the comments made by Dr. Higgs, who used the example of West Nile research, with 14 students having 60-70 publications before funding disappeared.
The day long event featured several panels on subjects of prevention and deterrence, surveillance and detection, and preparedness, response, recovery and mitigation–with scientists, legislators, academic leaders, industry representatives, and other dignitaries.
Dr. Amy Kircher is the Director of the Food Protection and Defense Institute at the University of Minnesota, and she also responded to questions by the National Blue Ribbon Study Panel on BioDefense She talked about the safety of our food supply, with a statistic alarming panel members that 10 percent of food in the grocery store is adulterated or altered. It was emphasized that adulterated food doesn’t necessarily mean the food is dangerous and can be as simple as a labelling error. However Dr. Kircher recommended consumers continue to buy from reputable sources and check labels–although sometimes those labels can be mis-leading.

Kircher added we need the intelligence community and the historical evidence of what food has been adulterated or altered in the past and what is likely to be adulterated in order to set priorities.

In addition to scientists and academic leaders, industrial representatives were present during Thursday’s discussion at K-State. Steve Parker is the head of North America Veterinary Public Health with the global health company Merial and he had recommendations for the group which include more agriculture advocates before governmental leaders, adding while agriculture continues to be our strength, it is at risk.

While dignitaries from all over the country took part in the discussion, Manhattan was well-represented with presentations by Dr. Stephen Higgs with the Biosecurity Research Institute, Dr. Tammy Beckham with the College of Veterinary Medicine, Jackie McClaskey with the Kansas Department of Agriculture, and K-State President Richard Myers.

The Blue Ribbon Panel has already made 33 recommendations, but are continuing to fine-tune that list and hope for more action in the near future.