Every governmental group representeded at Monday’s intergovernmental luncheon shared information on efforts at diversity training –although many of those who spoke up admitted efforts need to continue and more can always be done. Riley County officials led the discussion, with talk of their annual Columbus Day training for all employees–and continuing training and information provided by the Kansas Association of Counties, Affirmative Action, and the Kansas Human Rights Commission.

City officials also talked about constant efforts and reminders for city staff and employees when it comes not only to diversity policies already in place, but also sexual harassment and other issues

And Manhattan/Ogden USD 383 talked about their efforts as well, both at the student and staff level. It was noted the Manhattan HIgh school Indian mascot discussion brought on renewed efforts and the beginning of a diversity committee. 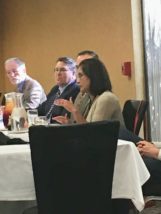 Manhattan City Commissioner Usha Reddi, who also is on the Riley County Law Board and is a teacher with USD 383, talks about the importance of continuing discussions, telling KMAN “the more we discuss about it together, we can bring more of the people that need to be at the table to the table.” And while policies are in place, Reddi cautions there’s more to it than that, saying perception is a huge part of it. “We may have a ton of policies but if the people in the community don’t have a different perception we have to change that perception and that comes from building relationships.”

The discussion also got into bullying and other forms of harassment among the governmental groups represented at Monday’s meeting. 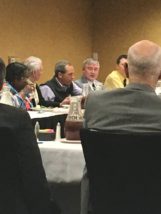 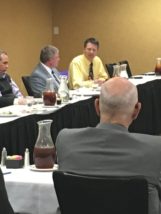 USD 383 Asst. Supt. Eric Reid tells KMAN diversity “is just a topic that always needs to be in our awareness and we need to push it.”  And Reid noted while his district has a lot of policies in place, more can always be done.

Reid and Supt. Wade both agreed the discussion was a good one, which also delved into the 50 some languages the district has to contend with–and translating services that can be provided. Reid told KMAN after the meeting USD 383 is going to get a Google translate button put on its website such as the city of Manhattan currently has.,