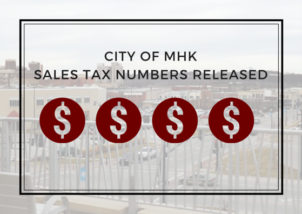 Manhattan sales tax numbers ended the year in a somewhat disappointing fashion according to City Finance Director Bernie Hayen. December figures, which generally reflect October sales across the community, indicate $912,482 collected compared to  $960,447 last December. The net budget impact for the month is listed a negative $89,736, and negative $273,341 for the year.

Hayen adds the December sales tax reports are down a little more than 2% compared to the final report for the same period in 2016. And he says the city is about $13K behind the total amount of sales taxes collected in 2015.